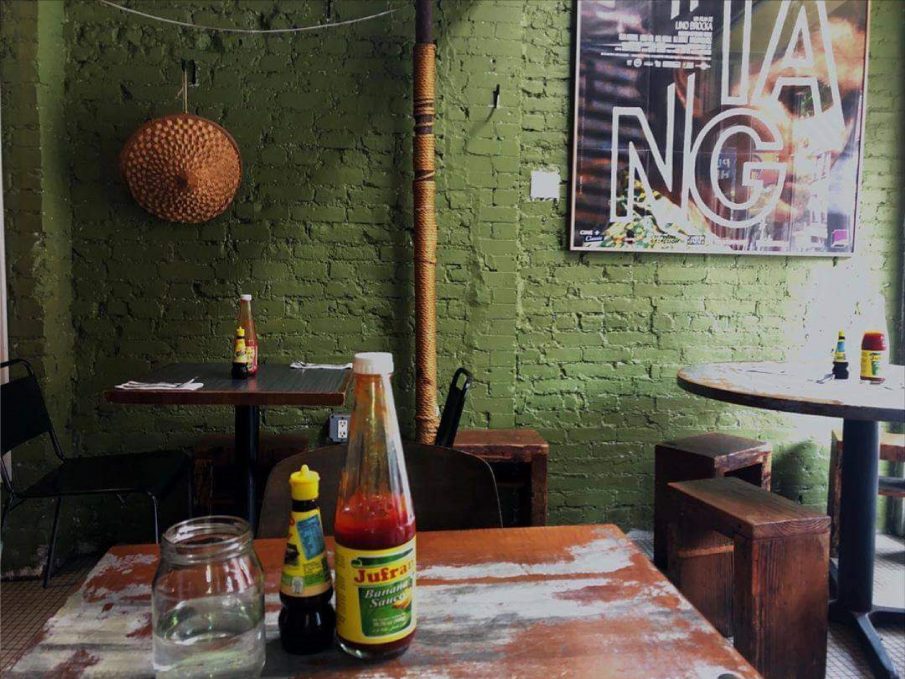 It was a warm early November day. My last morning in New York before I went back home. So I wanted to try something that I really like but still has so much more to discover. One of the biggest Asian communities in the US and in New York are Filipinos. Almost 1 percent of the entire population of this city is represented by this group of people. Filipino food became one of my favorite types of cuisine since I first visited the Philippines in spring 2018.

That is why I decided to try a brunch at one of the most famous Filipino restaurants in the city located in East Village, Maharlika. This word actually originates from the Malay language. In Tagalog, it has many different meanings, including royal. There was even an idea of changing the name of the country of the Philippines to Maharlika. Could it be that Filipino food, the underdog of Asian cuisines, is having its moment at last?

(Update 2021: Maharlika restaurant, unfortunately, is closed permanently since 2019 but I still wanted to write a review of this great restaurant)

Owners Nicole Ponseca and Miguel Trinidad opened this permanent location of Maharlika in 2011 after starting it as a brunch pop-up. Over the years, it rose to one of the top Filipino restaurants in the city, known for dishes that combined elements of American fare with Filipino cuisine, such as ube (purple yam) waffles with fried chicken or eggs Benedict with spam and kalamansi hollandaise. Maharlika became known as a standout for brunch in the neighborhood, as well as for its kamayan feast, which served a tabletop of Filipino dishes for groups to eat with their hands.

Maharlika brunch consists of small or large plates plus bilao plate and a choice of sides. In the small plates section of the menu, you can order some true Filipino classics. They have pandesal ($2) which is the quintessential bread of the Philippines. It is the favorite ”agahan or almusal” (breakfast food) for most Filipinos. At Maharlika they served it together with macapuno and guava jam. You can also try lumpiang ($8), a typical roll found all over Southeast Asia with different names (popiah in Malaysia, lumpia in Indonesia, …). If you are up for a challenge they even have the infamous balut ($4)!

In the large plates section, there are a few classics as well. One of them is also arroz caldo ($9) which literally means warm rice. In reality, it is a type of congee and it closely resembles risotto. They also have an interesting take on the classical chicken and waffle. In their Filipino version, they made the waffle with ube ($17)! Or a mango stuffed french toast ($12). The name itself tells you already that it is stuffed with mango. In this case, it is caramelized.

I was there by myself so I knew that I can not or that much food. So I ordered one of their most famous brunch options and that is eggs Imelda ($19). This dish pays homage to the infamous politician in the Philippines. She’s notorious for her 3000 pairs of shoes, among other things. It is Maharlika’s take on Eggs Florentine.

I got two perfectly poached farm-fresh eggs with kalamansi hollandaise sauce over them. It was served on something that is called laing. This is a Filipino dish of shredded or whole taro leaves with meat or seafood cooked in thick coconut milk spiced with labuyo chili, lemongrass, garlic, shallots, ginger, and shrimp paste. It originates from the Bicol Region. Hidden under all of there were two pieces of homemade pandesal. On the side, they also served two whole roasted prawns, kamote home fries, and fresh taro-root leaves salad. Each table also has a bottle of banana ketchup which is a famous Filipino condiment.

There are both alcoholic and non-alcoholic drinks on the menu. I never drink this early in the day that is why I ordered a fresh kalamansi juice ($4).

Was it for the price of 19 dollars? This is the most expensive item on the menu. It is worth every single penny 💯 Everything was made perfectly. Even though there were a lot of different flavors they all worked very well together. At first, I did not know what to expect because the ingredients seem completely different from your regular Egg Florentine. After the first bite, all the doubt instantly disappeared as I enjoyed every single bit, and even though it was a big portion I was able to finish it. I would definitely return because there are a lot more foods that I wanted to try. Unfortunately, as I wrote in the beginning, Maharlika closed permanently, just over a year later after I visited.

Previous Post First NBA game experience
Next Post Everything about New York Pass (Is it worth it?)