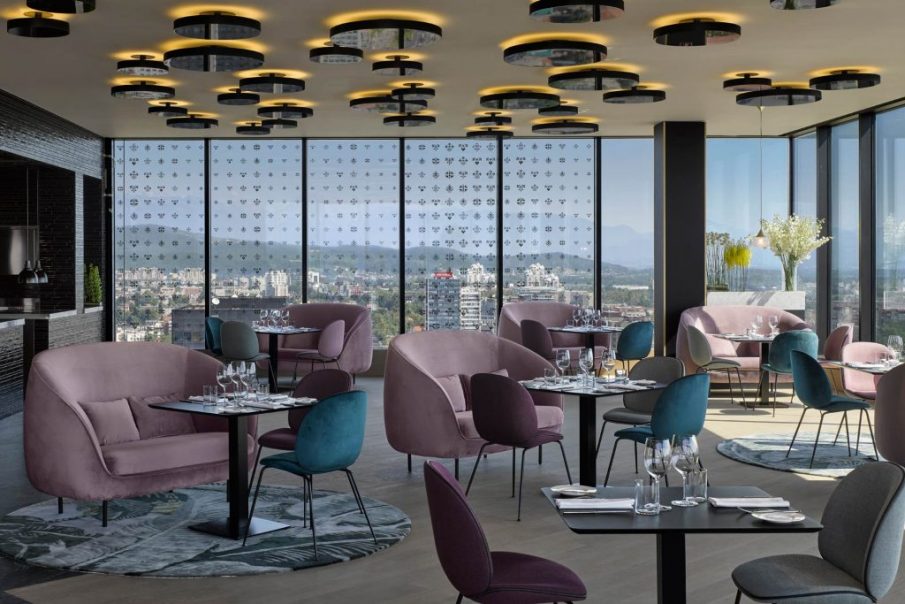 The capital city of Slovenia finally got a 5-star hotel about two years ago when the very first Intercontinental hotel in the country opened its doors. Additionally, Ljubljana also got the highest restaurant. Located on the 20th floor of the hotel, B-Restavracija (B as in Bee, most likely Carnional bee), offers its guests the view of the whole city and beyond. When the weather is clear the highest mountain in Slovenia, Triglav, and even the sea is visible. The restaurant is big and ellegant and the kitchen is open and attractive. The head chef has a Michelin star and all of these factors brought us here as well.

Nestled on the top of the InterContinental Ljubljana, spans the entire 20th floor of the building and includes a restaurant, an outdoor terrace, and a bar. The bar & restaurant have a spectacular 360-degree view overlooking the old town Ljubljana with the castle on one side and the Alps on the other.

The open kitchen gives the guest a peek into the process of creation of culinary masterpieces where the international kitchen and local flavors blend seamlessly. The restaurant is Italian, not just because of the food but mainly because of the chef, Alfred Russo. He has a Michelin star in Italy while in Ljubljana he created the restaurant concept and trained the team which is now lead by Komnen Bakić. The menu is elegant, yet recognizable and approachable, celebrating the vast range of Slovenian produce and products. Being so close to both the mountains and the sea, Ljubljana gives the Chef incredible access to the best of both worlds.

This was the first time that B-Restavracija took place in the Restaurant Week event. For their premiere participation, the chef prepared a 3-course set menu with a salad, a choice of two entrees, and a dessert. All restaurants also offer wine pairing for each of the course but we decided to order just water. The wine pairing was 15 euros which is an acceptable price for a restaurant of this level.

The spread was rather interesting. It was a tomato and olive oil butter with homemade pumpkin seeds bread. Who would have thought that something quite simple could taste that good! The bread itself was also really good. I usually do not eat that much bread. I would get full too fast in that case and bread is never the main reason to go to any restaurant. Next, we were served the amuse bouche. That was a bit of a surprise since it was not mentioned on the menu. It was quite a big plate of pumpkin foam, pumpkin seeds, and pumpkin oil. The dish was quite appetizing with vibrant colors and interesting taste.

And of course the salad. Who could have thought that a bowl of salad can find a place in such a fancy restaurant like B-Restavracija! I saw a photo of the dish before we went here. It did not look as big as it was when we got it. This huge bowl of salad was a mixture of a few different kinds of salads with cranberries. The best part was hiding on the bottom of the bowl. That was ananas carpaccio which gave the whole bowl a sweet and sour addition to something that was already on the edge of perfection.

For the entree, we could choose between a meat or a vegetarian dish. Since we wanted to try both options this is what we did. I opted for the meat dish. I had a medium prepared aged rib-eye steak with honey and mustard sauce, topinambour puree, goat curd cheese, and a pear. The steak was prepared perfectly as I wanted. The combination with the sides worked really well. Some people do not like goat curd cheese too much because it has quite a strong and specific taste. I generally liked it and with the taste of the pear on top of the cheese, it made it even better.

The other half of the table opted for the vegetarian option. The delicious looking oven-roasted eggplant was covered with mozzarella cheese and filled with tagliolini pasta. All together lied in a tomato sauce full of flavor and lots of herbs. The vegetarian option looked excellent as well and it seemed to be even bigger than the meat option.

After a short break, we were served with the final course which was a dessert. This superior chocolate dessert was presented in an interesting box-like plate. The dessert was all about chocolate. There were five different variations of it but my favorite one was definitely the chocolate praline ice cream. In the end, we both agreed that it was a delicious dessert although quite there on the edge of being too sweet.

This was the first time that B-Restavracija took place in this event and it definitely did not disappoint on any level. The service was perfect and professional which is mandatory for a five-star hotel. It is a bit difficult to choose which was the best dish on the menu. In my opinion, the best was left at the end with the dessert. Closely in second place was the meat entree and the amuse bouche was a pleasant surprise for the start as well. International guests coming to high-end hotels like Intercontinental are used to this kind of service and level of the food, while domestic guests come here out of curiosity. Coming to B-Restavracija you can expect a beautiful view of Ljubljana, with prestigious hotel glamour and attractive chef’s creations.