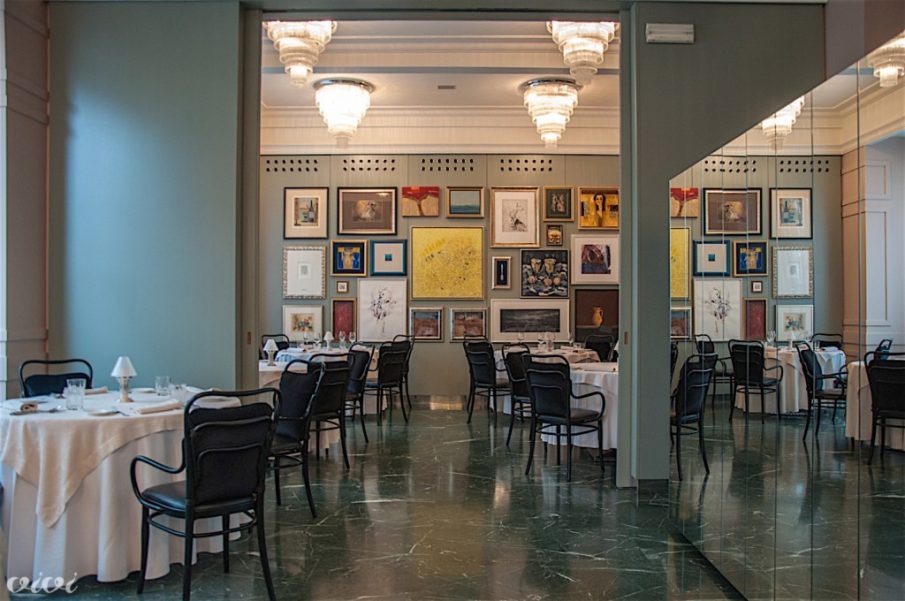 Miklošičeva ulica (street) in the center of Ljubljana is home to one of the most prominent restaurants in the whole country, not just the city. JB Restaurant was declared as one of S.Pellegrino’s Top 100 World’s Best Restaurant a few years back and it still belongs there. It’s the closest interpretation of a sophisticated pallet you’ll ever experience in this region. This restaurant also laid the foundation for developing Slovene cuisine and getting more recognition worldwide as well. And on a cloudy Tuesday noon, we had a reservation for a table as well. And we were ready to try what the chef, Janez Bratovž, prepared for us and everyone else in this fully booked culinary temple of Slovenia.

Restavracija JB is located inside a famous Secessionist building of the 1920s. which was designed by well-known architect, Jože Plečnik. The chef, Janez Bratovž has always been defined by his strong desire to find perfection. His culinary creations are bold and original. During his career, he has won numerous awards. The only more important award that he did not get yet is a Michelin star. JB is a family-owned restaurant. His wife Ema is the manager, his daughter Nina is a sommelier, and his son Tomaž is following his father’s steps of one day becoming the second world-renowned chef in the family.

In this edition of the Restaurant Week, they prepared a 3-course set menu with a cold appetizer, a hot appetizer, an entree. Dessert was optional in the end as well for an extra fee. We were already full by then so we decided to not order any. All restaurants also offer wine pairing for each of the course but we decided to order just water. At 12 euros, wine pairing was a bit cheaper than in the previous restaurant.

Before the start of the menu, we were served some spreads. It is almost obligatory for the restaurants participating in this event to prepare some spreads or an amuse bouche before the other courses. In this case, we got a homemade herb and regular butter together with freshly baked bread. Both kinds of butter were creamy, soft and tasted really well. The homemade bread was also good but I usually do not eat that much bread. I would get full too fast in that case and bread is never the main reason to go to any restaurant.

The first real dish that we got was a cold appetizer. On the plate, we got a grilled octopus on potatoes with wasabi sauce, olive oil, tomatoes, olives, and tonka beans crust. It was probably one of the biggest cold appetizers that any of us has ever got in a restaurant of this kind. There were a lot of octopus parts on the plate which tasted quite good but was a little bit too hard to chew. Also, there could have been a little bit more wasabi sauce because we were barely able to taste it. The wine offered with this course was a 2015 Malvasia Cat-hill Polič from Slovenian Istra peninsula.

Next, we were served another appetizer which was a hot one. Before our eyes, we got something quite familiar and yet unique and modern. We got a cheese burek! This was not in any way similar to other bureks with yogurt drink that you can get across the road or in any other places. This was a modern reinterpretation of it. The cheese burek pastry was put on a bed of yogurt with cucumber and thyme oil. On top of it, there was a slice of smoked goose breast and marinated cabbage. This was definitely the highlight of this menu in my opinion. Furthermore, it was one of my favorite dishes of all the dishes that I tried during this week. It was hot like a burek is supposed to be, the pastry was crunchy and the smoked goose breast put some extra flavor to the whole dish. The wine offered with this course was a 2017Chardonnay Stayer from Štajerska region.

Our last dish was the entree of roasted pork neck with honey sauce, mustard seeds, and caper with the side of sweet potatoes puree, grilled leek and wild garlic leaves. Yet again the portion was bigger than expected. That is good because we all like meat and sometimes in these kinds of places you do not get that much of it. Roasting a pork neck this thick can be quite difficult but they executed it perfectly. It was juicy and full of flavors as well were all the sides. Spring is the season for wild garlic in Slovenia, so a lot of restaurants had it somewhere in their menus. This was the only place where they served the whole wild garlic leaves, though. The wine offered with this course was a 2016 Goli breg Fedora from Vipava valley.

Being one of the most famous restaurants in Slovenia and having abroad recognition as well it did disappoint a bit in our first visit. Every next visit they stepped up the game, so this time it was nearly perfect. Service was great all the time even though they always had a full restaurant. The dishes were all very creative and more or less tasted really well. Portions were much bigger from the previous two visits but on the other hand, this is not a restaurant for feasting but is more a festival of flavors. This was definitely the case this time and that is the reason for us to come the next time as well.

Type of cuisine: Slovene modern cuisine with a touch of Mediterranean and French cuisine