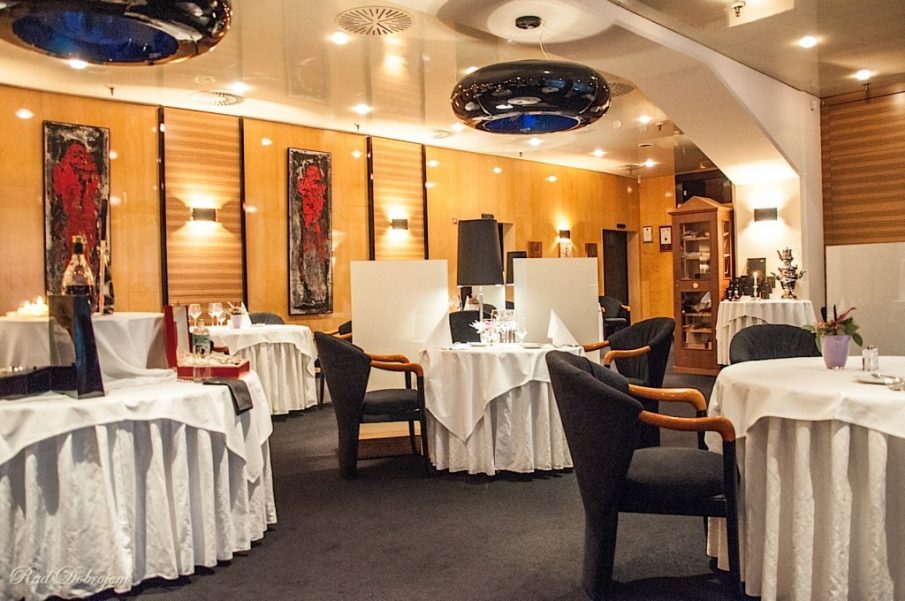 Just a day after my return from the short trip in the US we already visited our first restaurant during one of the most exciting food festivals in Slovenia, called Restaurant Week. We decided to go to a restaurant that none of us have been before. We actually wanted to go to this specific restaurant in the past couple of events. It was already fully booked for the time slot when I sent the reservation. I am not sure how is that possible, though, because I sent the reservation just a few minutes after the reservation window for the event opened. They had another time slot open for that day but unfortunately, it did not work for us.

Maxim is a restaurant of excellent quality with the character of an establishment for formal affairs. It is situated in the heart of Ljubljana and its business, political and cultural center. Maxim is one of the best fine dining restaurants in Slovenia and the recipient of several awards, such as the Gault Millau prize for best service in 2019 and the Gault Millau prize for high quality cuisine in 2019, voted the best restaurant in Ljubljana in 2017 and 2018 by a Slovene news media Siol.net, while the restaurant was ranked among the top 10 restaurants in Slovenia for its superb wine selection, by the same media.

The star of Restaurant Maxim is the young chef Peter Kovač, who improved on the creations of famous chefs before him. Peter is a modern, sophisticated in the world of culinary art, and technically skilled chef who brought fresh change and many ideas for new dishes.

In this edition of the Restaurant Week, they prepared a 3-course set menu with an appetizer, an entree, and a dessert. All restaurants also offer wine pairing for each of the course but we decided to order just water. We started off with the appetizer which was gnocchetti with wild garlic, bell pepper, courgette, datterino tomatoes, green asparagus, and pine nuts. It tasted really good and the portion was bigger than what it seemed at the start. The wine offered with this course was a 2018 Verus Sauvignon from Jeruzalem Ormož

Next, we had the main course which was young piglet crown with honey glaze, slowly roasted pork’s belly, potato espoume, cracknels, a potato side dish, and seasonal vegetables. The piglet was prepared perfectly although some people would probably preferred to have it a little bit more done than in this case. It was also the first time for me to have a piglet crown because usually other kind of meats are more common for crowns, like lamb for example. Everything else tasted quite good as well, except the pork belly was a bit over in my opinion. The wine offered with the main course was a 2017 Blue Pinot by Dušan Kristančič of Goriška Brda winery

And for dessert, we had apple crostata with Bourbon vanilla, apricot sorbet, and lemon-thyme foam. This was probably the highlight of the lunch because it was really good and you had a combination of sweet and sour that all worked really well with each other. Thyme is in recent times quite popular add-on in desserts, especially with the combination of lemon. The dessert wine offered in the final course was a 2016 Prus Yellow Muscat from Bela Krajina wine region

Overall, Maxim is keeping its foundation of French cuisine with a touch of Mediterranean and local cuisine which was visible on this edition of the Restaurant week as well. The food was not that amazing or unique compared to some other restaurants. It still left a positive note with great flavors and more or less perfect executions of individual ingredients on the plates. They have an extensive list of light and fresh wines and also the wine pairing seemed to be quite good as well. The price of 16 euros for it was among the most expensive wine pairings of all the restaurants that we visited this week, though. That was also the reason why we skipped it because it cost almost the same as the food. The service was perfect and professional and the ambiance of the whole place is great as well.

Type of cuisine: French cuisine with a touch of Mediterranean and local cuisine