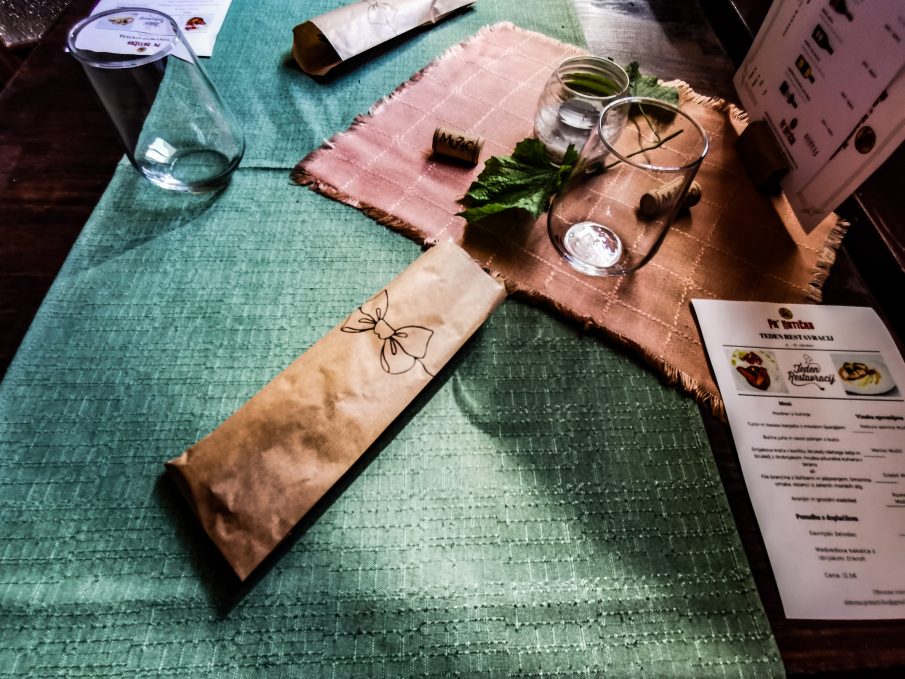 On the second day of Restaurant Week, we also headed in the same direction as we did yesterday. The difference between the first and the second day was that the restaurant was located much closer to Ljubljana. There are quite a lot of famous restaurants in the suburbs of Kranj, the fourth biggest city in Slovenia. One of them is Gostilna Pr’ Matičku. This restaurant is famed all over the country for its game meat dishes, especially rare wild game meats that are not venison for example. We visited this restaurant on a couple of occasions already during some of the previous editions of the restaurant week. We were always beyond satisfied. That is why we wanted to check out the food this time because the menu seemed to be very promising.

On the very first visit to this restaurant, we sat outside in the garden which made the whole experience even better. Unfortunately, on the second and also on this visit we sat inside because it was too cold to sit outside. That is not a bad thing though because the interior is perhaps even more interesting! The chef who owns this restaurant is also a hunter in his free time. You can see various stuffed animals around the place, there is even a stuffed bear next to the counter! So this restaurant perhaps is not the best idea for bringing your date here if he or she is a vegetarian or a vegan. They are also famous for their fish dishes so you do not have to be a complete meat eater to enjoy this place.

For this edition of Restaurant Week, the chef of Pr’ Matičku created a five-course menu. We had the choice of either a meat entrée (main course) or a fish entrée. There was also a possibility of expanding it for two more courses. The two dishes for the extra cost seemed way too good to skip them that is why we ordered one expanded menu as well which we shared then.

For the amuse-bouche, we got a couple of different pates. One was mushroom pate and the second one was deer liver pate. Definitely not your average day pate but they were good. Besides that, we also got homemade butter and all of these went together with the homemade bread that we got on the plate as well.

Once we finished with this course, we got our first extra cost plate. This was a plate of cold cults of ”Savinjski želodec”. Pork meat, bacon, salt, pepper and garlic water are dried up in the pre-Alpine climate, in traditional wooden granaries for 4-5 months. It was first mentioned all the way in 1620! The cold cut was served together with horseradish which was quite spicy and some pickled mushrooms. In addition, we got some extra bread as well.

The next course was a salad. Well, not really a salad but because it included so many salad components it could be called like that. In reality, it was a tuna and a salmon carpaccio with sea fennel. At first, the waitress made a little bit of confusion because when she was explaining the dish she told us and another table that it was a deer carpaccio. Eventually, one lady did not eat that part because she does not eat meat. Luckily, the waitress apologized for her mistake and corrected her mistake. I called this a tropical salad because it had some fruit components as well. There were figs, strawberries and oranges. It was very refreshing.

The first hot dish was a pleasant pumpkin soup. In the soup, a ravioli stuffed with pumpkin was hidden. And to finish it up the chef grated some chestnut over the soup. Pumpkin and chestnut are foods that are found quite commonly on the tables in Slovenia during autumn. There are as many variations of pumpkin soup that you can not even imagine. I had so many of them in my life and yet this one was one of the better I had in recent times. The quantity of the soup was much bigger than how it first looked like and even though I tried to refrain from eating everything because I knew that there were more courses to come, I just could not because it was way too good to leave anything to go to waste.

I was looking forward to this dish the most for the entire lunch. It was the second dish that was for an extra cost but let me tell you it was worth every cent! I do not know in how many countries besides Slovenia you can eat bear meat. This is something quite unique to Slovenia which has to do with the fact that Slovenia also hosts the biggest bear population in Europe. So it is not a surprise that some end up as food as one of the ways how to control the population. It is not that easy to find places that serve bear meat though. There is a vendor at the Central Market in Ljubljana who is selling bear sausage but that is not exactly the same as eating regular meat.

I did try bear meat before in a restaurant in Slovenia during one of the previous restaurant weeks as well. That was different because it was made like a steak. At Pr’ Matičku, they decided to make a variation of a famous Slovene dish with bear meat. This dish is so-called ‘‘Idrijski žlikrofi” with ”bakalca” sauce. Idrijski žlikrofi are a type of filled dumplings that originate from the town of Idrija in west Slovenia. There are more ways how to make them but the most traditional way is with ”bakalca” sauce. This sauce is usually made with mutton meat. At Pr’ Matičku they decided to replace it with bear meat instead!

The presentation of ‘idrijski žlikrofi” with bear ”bakalca” sauce was really good as well. The dish was served in a jar so you could see the layers perfectly and some edible flowers were added on top of the dumplings to make the presentation even prettier.

The second highlight of the lunch at Pr’ Matičku was also the main courses. We ordered a fish and the meat main course and it was difficult to decide which one looked better when they arrived. They both looked like art! The fish entrée was a sea bass fillet with chanterelles and barley, green seaweed tagliatelle and lemon sauce to add a little bit more freshness.

On the other side was the meat entrée which star attraction was roe deer’s shank confit. Next to it were a couple of ”štruklji”, a traditional Slovene rolled pastry which can be either sweet dessert or used as a side dish to some meats. There are so many different types of them. On my dish, I got one that was filled with red cabbage and one that was filled with chives. That was not everything that I got on the plate though. Between the two ”štruklji” there was a Slovene sort of a pear, called Pinturalka that was cooked in Teran red wine. It was a huge portion and I was barely able to finish it. The real size of the shank was only seen once I finished eating. It has a little bit less meat on it compared to pig’s shank but the meat is softer and less dry.

The dessert was a lot more simple and complex than the previous courses. That seemed perfect as we were already quite full so a dessert that called out simplicity was a perfect way to finish lunch. It was composed of two scoops of ice cream (chokeberry and grape) and a flourless walnut roll. I usually prefer more sweet ice cream flavors. These two were a bit more sour flavor but they were still really good and would have eaten more of it if I had the chance

Gostilna Pr’ Matičku once again proved to be a great place to find some very creative dishes, especially with wild game. All the dishes were put together very well and their presentations were amazing as well. That is especially true for the warm appetizer and both of the entrées. Bear meat tasted great and was not as chewy as the last time I had it at another restaurant. I will also always remember the size of that deer’s shank. It was probably the biggest shank of any kind of meat that I had so far.

The whole menu was balanced in the right way as well. They did not start with a dish that would be too heavy or that would make us full too fast. And once we were practically completely full already, that happened after the main courses, the dessert came and made sure that the meal would have ended in a perfect way.