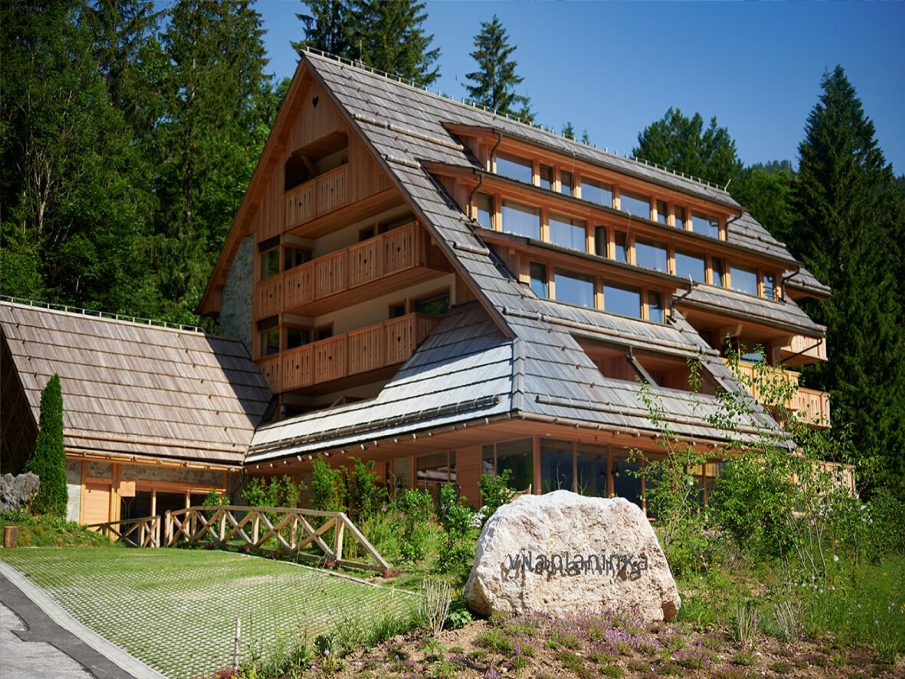 For the beginning of this edition of Restaurant Week, we decided to try a new place. And what is better than combining that with a trip to a place with such a serene and captivating nature than Jezersko! This valley in north Slovenia is considered to be one of the most beautiful Alpine valleys in Europe. In the middle of it is Vila Planinka. This boutique hotel was completely renovated just a year before and is now a completely zero waste and eco-friendly hotel. Furthermore, it also has a wonderful restaurant on the ground floor and we went there for a very pleasant lunch.

Vila Planinka does not stand out in an architectural way and does perfectly blends with the forest behind it. Rooms do not have any sort of electronic devices based on their philosophy that would bother the relaxing energy of this boutique hotel. The restaurant does not fall behind in any of the views of the hotel. Culinary is entirely based on the local ingredients and they prepare traditional dishes which are made in a more modern way.

Due to the coronavirus protocols only every second table had guests. This is actually better as it makes the atmosphere even more peaceful then. The first thing that we noticed once we sat down was the menu. It was not a regular kind of a menu because it was at the same time a postcard as well! We decided to keep them as a souvenir but there was an option to send it as well with the help of the hotel without any costs.

Every restaurant during Restaurant Week usually has wine pairing. Vila Planinka was no exception. As half of the table was driving and the rest does not drink we chose to skip that. There was something else that aroused our interest. They offered a non-alcoholic pairing with different kinds of apple juices made from old Slovenian sorts of apples! None of us has ever tried anything like that so we decided to try it and see how different apple juices can be. One other aspect where you can see how local this place is trying to be is the fact that they do not have coca-cola or any other foreign drinks like that. More places should be like that.

For the menu, we had the choice of either a meat entrée (main course) or a fish entrée. We ordered one meat and one fish and then we would be able to try a bit of everything.

The lunch began with a basket of homemade bread. There were three kinds of bread: spelt, beetroot, and sourdough bread. To go with the bread we also got homemade butter served on a stone that was carved out from a quarry in the valley. Butter was delicious as were all the pieces of bread but we tried to refrain from eating too much bread. Otherwise, we would get full too fast. My favorite one was the beetroot bread which is a bit of a surprise to me because I am not that big fan of beetroot but this was really delicious.

At the same time, right before amuse-bouche, we were served our first apple juice. This was a type of a spritzer but not an alcoholic one. It was combined with carbonated water by Cana Royal Water. There was also a stick on the glass and on it were differently dried apples. From this sort of apple this juice was made as well. Truly captivating!

This was followed by a two-part amuse-bouche. The first part was served on a one-bite spoon. It was a Slovene version of Baba ghanoush with buckwheat popcorn. The second one was a celery tuber soup and a homemade breadstick.

Before the appetizer, we were served the 2nd apple juice. This one was completely different from the first one. It was a cloudy red apple juice. I have never seen an apple juice so red in my life before! In contrast to the first one, this was a bit sweeter and it was one of my favorite ones.

Then came the cold appetizer. A lot of restaurants offer tartar for appetizers but no one offered this kind of tartar like Vila Planinka. The chef made beetroot tartar with truffles and Jezersko tea. I did mention before that beetroot is not exactly my favorite type of vegetables but I did love the beetroot bread at the beginning. It was no different with this dish. Every ingredient worked together perfectly even the tea component. The taste of the tea was felt more in the background and it reminded me of the mountains that I was able to see right through the windows of the restaurant.

Before the main courses, we were served our 3rd apple juice. This one was cloudy apple juice made with a mixture of various older Slovene sorts of apple. The farm that provided apples and the knowledge of apple juices is from an area in Slovenia called Kozjansko. That area is the most famous for apples. The farmer only uses apples from 40 or 50 years old apple trees because it gives the apples a better taste.

As the sun was lighting up the dining room we were served the main courses. The fish entrée was zander with mashed black lentils and buttery tarragon. The meat entée which I ordered was even more special. It was quail with porcino mushrooms, turnip, honey, and mustard. This was the first time I tried quail and hopefully, it was not the last one as it was delicious. As it does not have that much meat as bigger birds such as chicken or turkey it is much more difficult to prepare it perfectly as they did it here.

It was time for the last apple juice. This one was a cloudy juice like the one at the previous course but with a twist. They added strawberry syrup and basil oil! And on top of that, there was also a strawberry on the glass itself as well.

We were quite full by this time already but everyone says that there is always space for dessert and we are glad that we had it. It was not a classical dessert. On the dish, we got fresh ricotta, apple, hazelnuts, olives, and basil. It was simple on one hand but on the other hand, it was really delicious and practically as soon as it appeared it was gone already. In contrast to regular desserts, this one was not sweet as well but that did not affect its perfect flavor.

Vila Planinka definitely proved to be a place that offers guests everything that you would expect from a boutique hotel. That includes an adjacent restaurant offering delicious food. All the courses were made with local ingredients and all the flavors worked well with each other. My favorite course was the meat entrée as I have never tried quail before. The flavor of the side dishes was a bit too sour but the honey component did help to balance that. This was the first time that any of us has eaten here and it will definitely not be the last time.