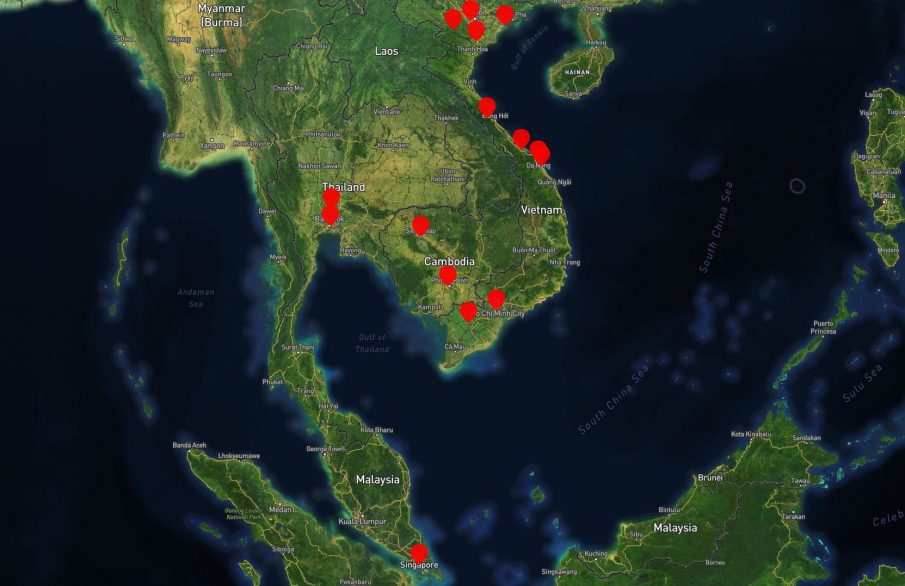 This was my first ever real solo trip that I made for a longer period of time. I did go on my first solo trip at the age of 19 when I finished high school. It was only for about two weeks then and then I only went to Vienna, Prague, and Budapest. It was much different at the beginning of 2017 though. I did not honestly know what to expect but I was looking forward to it. I never regret going by myself on such a long trip for the first time because the trip provided me lifelong experiences and I learned a lot about everything during those 40 days.

My trip lasted for 52 days in total from the time I left from home till I got back home. I was traveling between 21st of February and 14th of April. February is a great time to visit Bangkok. There might be some occasional rain showers although in my case I mostly experienced dry conditions and it is also not that hot yet but closer it gets to April hotter it gets. Cambodia is blessed with one of Asia’s simpler weather systems. The country has two distinct weather systems, but you can travel there all year round. I visited it at the beginning of March when it is still dry season. It did not rain at all and it was not that hot either.

Vietnam, on the other hand, is much more complicated when it comes to weather. There is not really a right or wrong time to visit Vietnam as during the most months of the year you will experience both sunshine and rain. In general, the best month to visit is March. It is not that hot yet in the south around Ho Chi Minh City, while in the north it is not that cold anymore as well. I had quite good weather throughout Vietnam because it was only raining for one day in Phong Nha Ke Bang National Park. I also had some rain in Hanoi but that did not affect my itinerary that much. There are some places that are not that good to visit in spring. Sapa, for example, is definitely one of those places. The farmers just start to plant the rice around this time so the fields are mostly empty and just muddy. So instead I decided to visit Mai Chau. It is similar to Sapa but much better to visit in spring. Furthermore, it is much less crowded and touristy as well. I also visited Halong Bay which is quite good at that time of the year. The weather was a little bit foggy and cloudy at the time but it was not that cold. If you want to be sunny you have to go there around May to August. It is much more unstable though because of unpredictable thunderstorms

My last destination was Singapore. This small country lies practically on the equator so it does not have any particular weather seasons. While temperature does not vary greatly throughout the year, there is a wetter monsoon season from November to January. I was there in April and it did still rain quite a bit at sometimes.

First of all, this was my first real solo trip as I have mentioned already. That is why one of my goals was to see how would I like it and feel about it. Secondly, I went on this trip to experience new cultural things and try new food. One of the main goals was also to see the famous Angkor complex in Cambodia. I was always interested in the history of Asia. That is why the Angkor complex was one of my highlights. For the same reason, I also visited the ancient capital of Thailand, Ayutthaya and the historical cities of Hoi An and Hue in Vietnam. When I was in Ho Chi Minh I also went to watch the new King Kong movie with a few of my local friends from there. I did not know till then that most of it was filmed in Vietnam. That is why I was really looking forward seeing Halong Bay and Trang An in person. Vietnam is also famous for its street food scene. At that time I did not go on any food tours yet. I only did my own food searches. My last destination was Singapore. I always wanted to see the Singapore Zoo since I was much younger but at that time I never had the opportunity to visit it.    Written below are some of the highlights from my trip although there are too many to include in this list

Planning this trip was not as difficult as I thought. When I started with planning it, it kinda all went with the flow. I decided to book an open-jaw flight, meaning that I started my trip in one city and ended in another. In this case, I did not have to go back to the starting point. I saved some time by flying to and from some places (i.e. Bangkok to Siem Reap). I also flew with Singapore Airlines from Hanoi to Singapore. In 2017 it was the 2nd best airline in the world but last year it became number one.